dbnAudile designed and supplied lighting equipment to two innovative site-specific shows in Hull created by outdoor arts and performance specialists Walk The Plank, in their role as artistic directors of Hull Freedom festival – a diverse mix of arts, music and cultural events staged over three days in and around the city of Hull, UK.

dbnAudile regularly collaborate with Walk The Plank, known for their ‘out-of-the-box’ approach and imaginative, eye-catching public art presentations which challenge, engage and appeal to wide and diverse audiences.

Stephen Page and Nick Walton, both of dbnAudile, lit the two one-off shows which formed two of the main spectacular set pieces for the festival - 'Voices of Freedom' and 'Over and Out'. 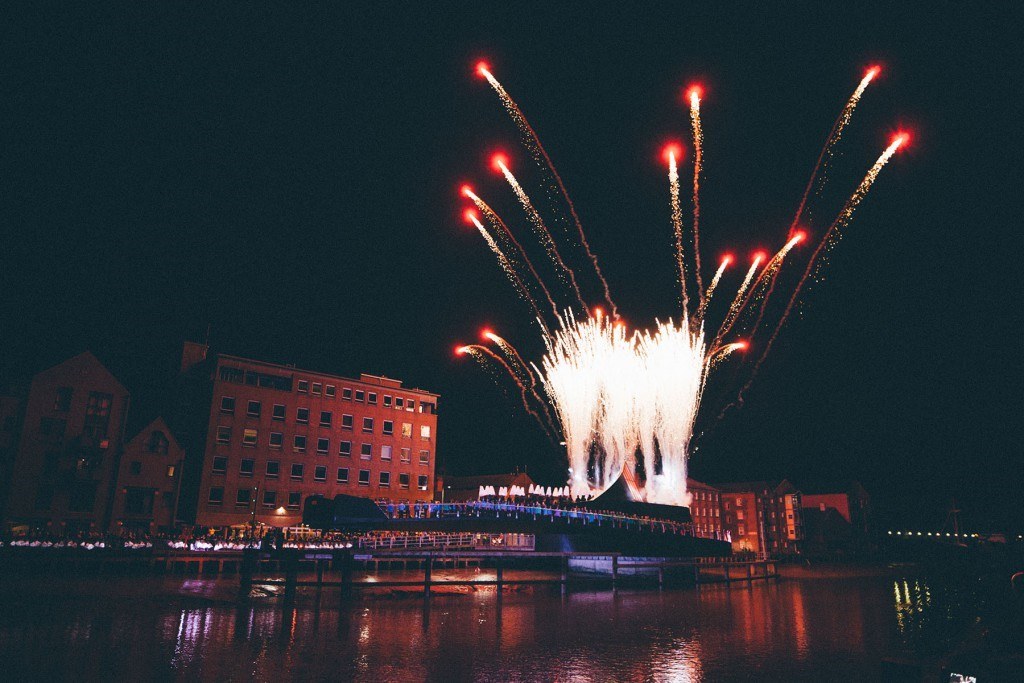 The 'Voices of Freedom' opening night spectacular took place along the banks of the River Hull, right between two bridges; the Scale Lane Swing Bridge and the Myton A63 Road Bridge.

Stephen called on his wealth of experience at lighting large scale outdoor events for the occasion. He had a vast space and many specific areas to light including the two bridges, assorted buildings, the choir and the actors.

Scale Lane Bridge was illuminated with five Clay Paky Sharpies and five Sharpie Washes helping to establish the ‘voice of the river’ through the medium of light. The voice appeared during the narrated elements of the especially composed sound-track by Graeme Stewart.

Additional bridge lighting came in the form of Spectral LED PARs plus around 500 fairy lights which brought a magical glow to the space. 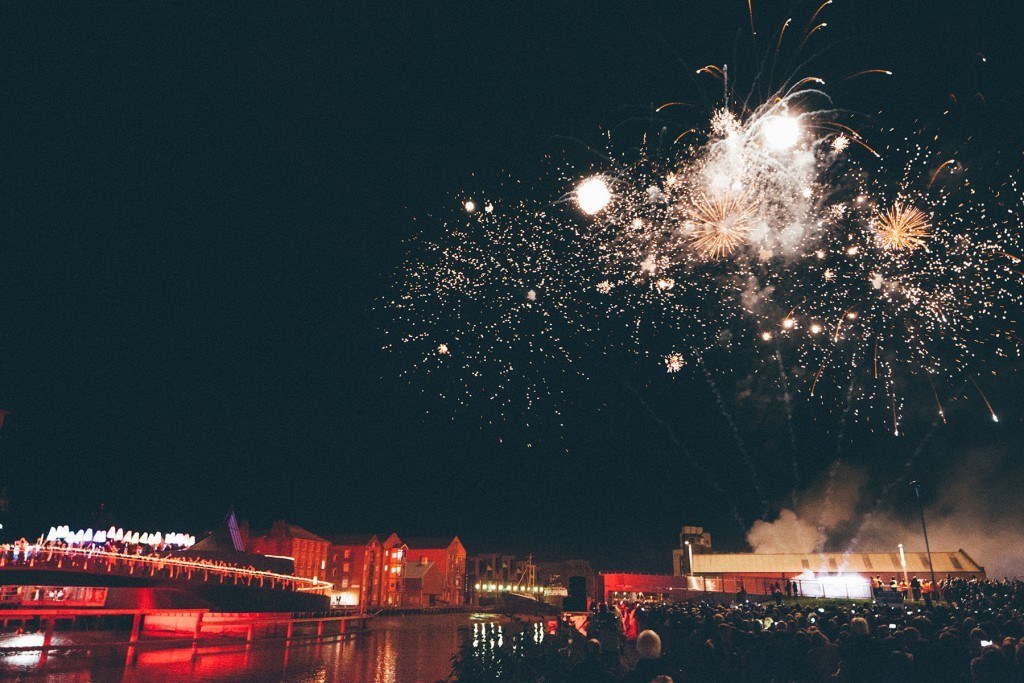 To light the river and the relevant surrounding buildings, Stephen utilised four of dbnAudile’s brand new high powered Studio Due RGBW CityColor LED FCs – the latest ones – their intensity and excellent quality of light proving perfect for the application.

He also deployed four CP Mythos and 10 x Alpha Beam 700s in dbnAudile custom weather domes either side of the river bank, together with some Atomic strobes, with the data signal to the far side beamed via WDMX wireless links. CP GlowUp battery powered LED uplighters on the boat were also controlled via WDMX.

Stephen ran all the lighting using a Jands Vista S3 console located on the east side of the river using a combination of time-coded and manually executed cues.

His big creative challenge was lighting up the black Scale Lane Bridge, but the new CityColors were so powerful that they handled it with ease.

Programming time was also restricted on site as the area is heavily residential, however Stephen was able to do a good portion of this beforehand using WYSIWYG previsualisation.

He worked on site with two dbnAudile crew – Moss Everhard and Andy Pole – getting in on Wednesday for the Friday performance. 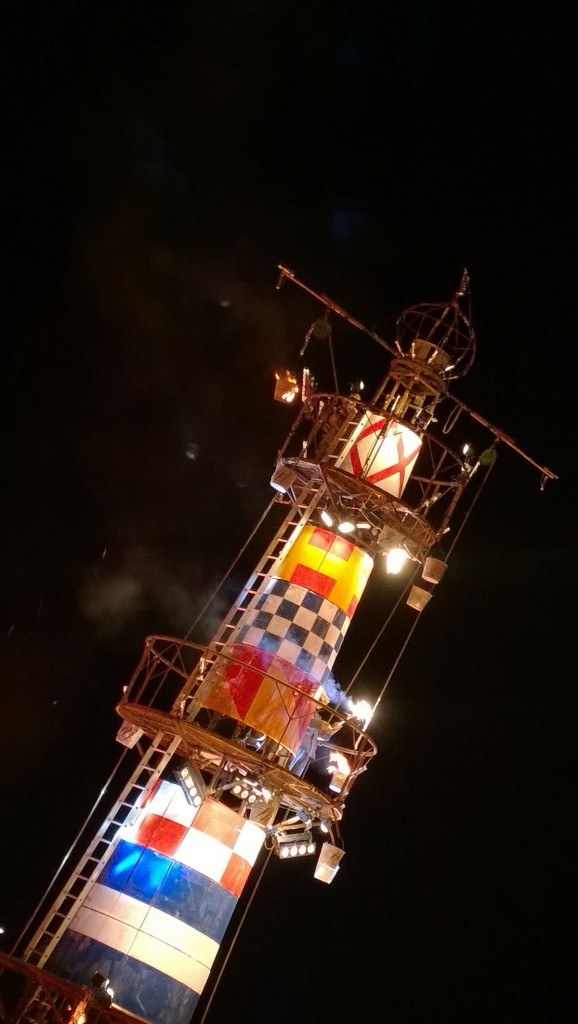 Across town, on a piece of wasteland near Hull’s docks, on the Saturday night of the Freedom festival, dbnAudile’s Nick Walton took up position behind the Avo Pearl Expert console being operated by Mike Durgan for the incendiary “Over and Out”.

Based around a (scenic) 12 metre tall lighthouse, the show was designed by WTP’s pyro expert Pete Finnigan to demonstrate the power and beauty of fire.

The primary factor in choosing equipment … was that it had to be durable and “As resistant as possible to fire and heat and all the hot debris and fall out from the pyro” recalls Nick, admitting that a few pieces of kit had in fact been incinerated in 2012!

The next challenge for the lighting was to ensure it was visible amidst the intense power and onslaught of the fire effects!

To achieve this, eight i-Pix BB4 LED binders were secured to the tower and 100 metres of egg-strobes were draped up and down it.

Eight Studio Due ArchiLED 150 outdoor PARs were positioned on the floor in front – chosen for their tight beam and durability in adverse weather – the second environmental consideration, and a further 24 generic flood fixtures also on the floor were used to light the actors from different angles.

Further away, to create some massive washes sweeping across the performance area, Nick used four more of dbnAudile’s stock of the new RGBW CityColor LED FCs which were more than enough to blast the space and tower with lumens.

Behind the tower at a safe distance was a bank of 12 x Clay Paky Sharpies to give super-sharp, definitive beams of light piercing up into the night sky. They were joined in this position by a pair of Griven Sky Rose 2.5K discharge beam fixtures which panned around adding some additional interest.

At the same position from the front were four CP Alpha Spot 575s, used to apply texturing to the structure.

“It was a hugely enjoyable show. Everyone had a great time rigging and running it and the audience was fully captivated by experiencing the compelling – and dangerous – ephemeral nature of fire."